Synopsis:
A mother is murdered in an apparent robbery. A young woman is raped and beaten in a home invasion.

Chicago Detective Alicia “Berg” Raymond doesn’t believe in random crime and is certain both cases are more than they seem—but can she trust her instincts, or is she too distracted by the feelings she has for former partner and new boss? For Berg, the need for justice burns deep and fills the emptiness where therapy and relationships fall short.

She’s certain the husband knows more than he’s willing to admit, but the trap to catch the killer is the loophole that sets him free. The rapist is caught and sent to prison, but when Berg gets closer to the family devastated by his depravity, their behavior doesn’t add up.

As Berg fights to prevent another murder, she crosses the line between hero and villain—and there’s no turning back.”

Review: Ok, I’m not going to lie – I read the synopsis of the book and had to read it. Little did I know, it was a part of a series and well, I hadn’t read the first book. Oops.

Berg is a detective in Chicago, along with her partner Arena. They’re tasked with solving two cases – a murder and a rape. Berg has been in love with Jay for a longgg time, but when a sneaky assistant district attorney steps into the picture, their relationship (which is on again off again, anyways) is put through the ringer. Trying to solve two crimes with a boyfriend-stealing ADA breathing down her neck isn’t so easy either.

I really enjoyed the overall themes in Broken  – it was a little dark since we see Berg, our main character, battling a sex addiction and depression, parts of her past continue to haunt her, and let’s be real, she’s kind of a hot mess. But the best part of Berg is that she was tough and endearing, and her spirit really stuck with me, even after reading. She gets herself in a love triangle, kind of messes everything up, and she works on picking up the pieces. As a reader, I felt like I wanted to smack some sense into her one chapter, and the next chapter I’d want to give her a hug.

Once I finished, I realized why I liked this book so much – it reminded me of the Stephanie Plum series by Janet Evanovich. (Kind of ironic, because the author mentions her as a favorite author in my interview with her below!)

I felt, though, that Berg was a much more relatable character, since I have battled depression personally in the past. And while addiciton has never been a probelm for me persoanlly, I have watched it destroy the lives and relationships of many friends and family memebrs. It’s rough stuff, and its real. The characterization of Berg in this book is really what made it stand out the most for me, and I highly recommend this to fans of fast paced, mystery, thriller, or crime-themed novels!

Author Interview: After reading, I was pretty excited to be able to ask the author a few questions about the book, her thoughts about some of the major themes, and a few fun ones that I was just plain curious about!

HR: What inspired you to write this as a series versus a stand-alone novel?

VS: When I started writing The Enemy Inside (the book before Broken) I had no plans for it to be a series, I was just planning a stand-alone book (and I had no idea that I had a crime fiction novel inside of me either, I always wanted to write fantasy!). The story, however, clearly had other ideas, so Broken soon followed, and I just finished the first draft of the third book in this series, tentatively called Blood Lines. The third book is the last in the series….as far as I know! I have left it so Berg’s story can continue if inspiration strikes me. Berg is a complex character and I don’t think I would have done her justice in just the one book.

HR: Berg has many ‘flaws’ as a character and battles mental health issues (addiction and depression). Why did you choose to write her like that?

VS: Depression and addiction are becoming increasing problems in our society and often go hand in hand together. I felt that you couldn’t have the kind of childhood Berg had without some problems arising because of it. But, because of what she has suffered, she’s a very good detective; her experiences have made her into the person she is and in that way it can be seen as a positive thing. I’m also quite open about my own battles with depression, and I wanted to use the book as a way to help others battling with the problem know that they are not alone and there is a way to recovery.

HR: What authors or books do you feel most influence your writing or writing style? And, which book is your favorite?

VS: Golly, I read voraciously—anything and everything. So I can’t pinpoint one particular author as having influenced me, it’s far more likely that they all have in some way! My favorite books include: Magician, The Girl with the Dragon Tattoo, The Hobbit, and my favorite authors include: Stieg Larsson, Janet Evanovich, Sue Grafton, Patricia Cornwell, Kathy Reichs, David Eddings, Charlaine Harris…too many to mention!

My writing style has evolved over time, as you might expect. The first draft of my first book was rubbish, I am mortified anyone read it, but now after having written four books I am much better (I hope)!

HR: If your book(s) were ever optioned for a movie, who would you want cast as Berg, Jay, and Arena?

In my mind, I always had Angie Harmon in mind for Berg, Alex O’Loughlin for Jay, and Victor Webster for Arena.

HR: Can you give us a hint of what’s next for Berg and the others?

VS: As I mentioned above, there is a third book in the series, which I am finalizing at the moment called Blood Lines. As for a hint…well, just when you think Berg and Jay are settled together, Berg’s past is going to come back to haunt her. I love Berg in this book; she takes no prisoners and blows shit up…literally. It’s been super fun to write!

Enter to win a boxed set, a copy of Broken, and more here: a Rafflecopter giveaway

For more about the author and the series, read more below the jump: 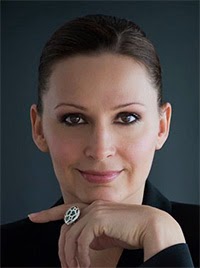 Author Bio: Vanessa Skye has always had a love of words and spent her school years writing poetry, speeches, and fictional essays.

After completing a Bachelor of Arts in print journalism and studying psychology at Charles Sturt University, Vanessa got a job at Australia’s largest publisher of regional and agricultural news and information, Rural Press, where she worked as a journalist in the central west of New South Wales for four years.
Thousands of stories later, Vanessa decided to move back to Sydney and try her hand at public relations while studying for a master’s degree in communication.
Skip forward a few years and Vanessa was once again joyfully studying various psychology subjects while managing a Sydney public relations firm. Enthralled with examining the motivations behind people’s actions, Vanessa realized what she really wanted to do in life was combine her love of words with her fascination for human behavior. So Vanessa quit public relations to begin the significantly more impoverished life of a professional writer.
Inspired by a recurring dream, Vanessa wrote her crime fiction debut, The Enemy Inside, which challenges the concept of justice, asks if the need for vengeance sometimes justifies murder, and explores whether you can ever heal from childhood abuse. Broken is her second book in this series. In her spare time, Vanessa wrote a short story, The Piece, which was published in February 2012, by Dark Prints Press as a part of the ‘One That Got Away’ dark fiction anthology.

Vanessa now works as a freelance writer, lives in Sydney’s northern beaches, and tries to immerse herself in salt water at least once a day.

Praise For Broken: “I have been diagnosed with clinical depression/situational depression years ago. It is very important that I mention this prior to reviewing “Broken” by Vanessa Skye… as it is very pertinent to where my mind was just prior to starting this novel. I had a depression breakdown about a week before starting this book. Little did I know, when requesting this book for review from Net Galley, that I’d be reading a book that reflects my soul at current state.

Biggest plus of this book was the creative use of song lyrics before the start of each chapter. So poignant, so stark, so dead on. The way the author writes about depression the lives within the main character is so gut twisting, I too found myself hard to breathe.

“Berg”, the main character, is a detective who is so deeply whittled with wounds from childhood it literally incapacitates her every aspect of life: Living, Breathing, Loving and accepting Love, Communicating, Sleeping. She’s a wreck of a woman… She’s BROKEN. However, the pain and abuse from childhood makes her ONE HELL OF A DETECTIVE. Her senses are sharp. She sees things her male counterparts cannot. She has the highest closure rate on cases.

However, your detective skills become questionable when she tries to juggle love and her heart, her past, a new partner that is relentless about sleeping with her, and an ADA who’s a total narcissistic bitch. The characters in the book are so well written you either hurt for them, hate them, or love them.

Vanessa Skye is a strong, poetic, articulate author. Broken is a second part novel, from the “Edge of Darkness” series. I have not read the first novel, “The Enemy Inside.” The author did a fine job of creating a second book that reading the first one is not required. This is a great stand alone book, which has areas of reflection into the first novel. I would love to read this book, as I’m highly attracted to the main character, her flaws and the author’s ability to bring it all to life.

I am so very impressed with this book. It gripped my innards and ripped them out, little by little, each time Vanessa wrote about the deep, sinking, killing feeling depression has on a person.”
via Goodreads

Other books by Vanessa Skye:

Thanks for reading and checking out the blog tour! Have you read any criminal thrillers lately? Are you interested in reading Broken by Vanessa Skye?
<br />
xo.
Leave a reply